NZDs is initially an ERC20 token using the Circle code base. Further chains will be added over time.

The circulating supply will be the amount of fully paid tokens that have been minted.

NZDs is audited quarterly by Ernst and Young to ensure that all controls are robust and 100% collatorialised.

Motivation
The New Zealand dollar is traded and used as a reference currency in several island territories of the South Pacific, including the Cook Islands, Nile, Pitcairn Islands, the Ross Dependency and Tokelau.

Although New Zealand is a small nation by population, its currency is heavily traded internationally because of the country’s stable local economy, large foreign bank base, heavy foreign trade and traditionally high local interest rates.

The New Zealand dollar is the 10th most traded currency in the world.

For
NZDS is a favored currency by carry traders due to its strong commodity backed market and high interest rates. Noting that interest rates are about to increase in NZ soon
Techemynt is a registered Financial Services Provider and is audited to ensure a 1:1 collatoralisation is maintained.
New Zealand is recognised as being in the top 3 countries globally for doing business due to its strong legislation and oversight.
Techemynt leverages the Circle code and is built on ERC20 with an intent to move to further chains.
Including NZDS will open up customer opportunities across the Asia Pacific.
There is latent demand for a USD:NZD equivalent pair due to banking restrictions (circa 100k per day)
NZDS has a clear path to liquidity across exchanges and further market pairs that will be activated in the next 3 months
NZDS will bring further demand to the DFX platform via its sister company bravenewcoin.com
NZDS peg is maintained on dassetx.com and has remained stable for the last 2 months (during BETA).
NZDS has interest of a number of global remittance providers.
NZDS retains the services of a recognised Market Maker.

Against
NZDS is a new stablecoin.
NZDS may reduce some of the pool demand for other tokens
NZDS may not hold its peg (unlikely as this has stabilised on dassetx and has 1:1 with funds in bank account)

Thanks for making the first proposal on DFX!

From a technical perspective, I particularly like the use of the Circle code as CADC and XSGD also use it. This will make the integration much easier. Chainlink also already has a NZD/USD price feed: NZD / USD price today | Chainlink

Adding a new stablecoin will dilute the DFX rewards in the existing pools, but we shouldn’t use that as an excuse to not grow the network further or else DFX will never grow the network effect required to reach the billions of users the protocol wants to reach.

If successful, we’ll likely need to also decide on how much DFX liquidity rewards will be allocated to the NZDS/USDC pair.

NZD being a top 10 currency in the world is quite positive. Hopefully we have lots of Kiwi’s out there that can find value in a NZD-backed stablecoin!

Amount of liquidity rewards allocated to a currency should be based on current currency trading volumes in forex markets. Top 10 Most Traded Currencies 2020 - REMITR

So if this proposal passes, NZD should have similar rewards to CADC, but proportionally more than XSGD

Finalizing a fair mechanism now, will lead to better clarity when 20-30 currencies are onboarded in near future

Yes, agreed we need a more structured method of allocating liquidity mining rewards. BIS (Bank for International Settlements) publishes a report every 3 years on forex volume by currency. See below for snippet. 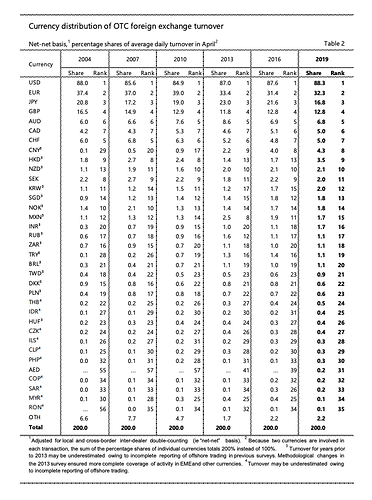 If we pull the data for the stablecoins DFX supports (minus USD), the following allocations would prevail:

This distribution probably would not be in the best interest of the protocol as it heavily skews towards certain currencies and would not help bootstrap new stablecoins into the market. We would probably need a better system in terms of providing the appropriate incentives to drive liquidity.

I don’t want to drive the discussion away from NZDS, maybe I’ll make a separate proposal about liquidity mining incentives for discussion there.

From what I’ve seen, there is clear demand for stablecoins that hold value better than USD pegged stablecoins. This combined with a large contingent of crypto whales moving to NZ as a “Switzerland of the South”, should bring more demand to DFX in aggregate.

For the utility of DFX as a forex protocol to be realized, and thereby succeed, it needs to support as many high quality stablecoins as possible. With this in mind I completely agree that concerns regarding the dilution of LP rewards for current pairs should not factor in. More currency pairs leads to greater utility, users, and network effect.

Up for voting: Snapshot

Another great step forward for the DFX ecosystem. Thank you everyone for voting!