DFX’s big move to massively upgrade DFX’s tokenomics is here. This is a proposal to adopt the “ ve ” model and evolve usage of the DFX token with veDFX!

Vote escrowed, or ve-tokens, are tokens that have been time locked in exchange for non-transferable voting tokens within the DAO. They also allow boosted rewards for those who lock.

The “ve” model was pioneered by Curve’s veCRV mechanism and quickly became a DeFi standard allowing composability across protocols. We are adopting a widely successful and battle-tested model of tokenomics for DFX.

“veDFX” stands for “Vote Escrowed DFX.” veDFX will allow the holder to both vote on proposals within the DFX ecosystem and earn a multiplier on rewards based on their lock-up period. This is done through a system of gauges. The more veDFX you own, the more voting power you have and the higher APY boost you can achieve! 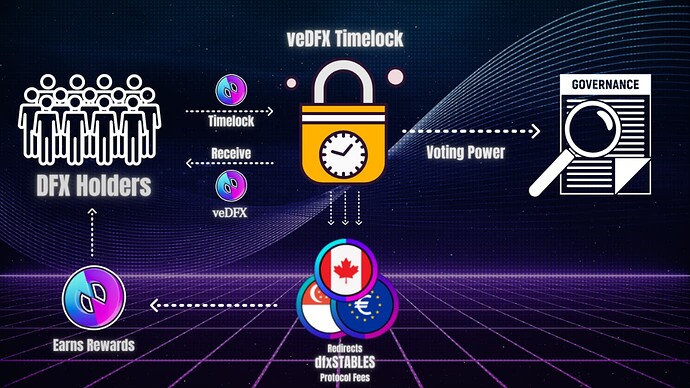 By locking DFX tokens for greater durations, increasing amounts of veDFX can be obtained. Any person holding veDFX will enjoy voting rights on gauge proposals (i.e. gauge weights). This ensures long-term alignment as only users who have chosen to lock their DFX will have the ability to vote on gauge proposals.

Excellent proposal that will greatly benefit the platform both short & long-term.

Good idee from a great project

Like other VE token systems, will it only be available on Ethereum mainnet?

For example, will rewards earned on Polygon need to be bridged to Ethereum for locking to get veDFX?

And will participation in the gauge system be on Ethereum mainnet only?

Looking at Curve and almost 90% of its circulating supply is locked as veCRV.

two thumbs up for me